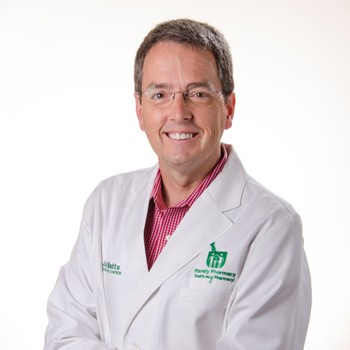 Jay Watts is a 1985 graduate of the University of South Carolina College of Pharmacy.

He has been voted Aiken Standard’s Best of the Best Pharmacist several years in a row. His areas of cognizance and passion include traditional pharmacy as well as Bio-Identical Hormone Replacement Therapy, Iontophoresis & Phonophoresis compounding, Veterinary Compounding, Pain Management, and Hospice Care. He is certified in general and advanced prescription compounding as well as general and advanced veterinary compounding. Jay has been a Fellow of the American College of Apothecaries since 1999 and served as the President from 2012 to 2013. He is also a Fellow of the American College of Veterinary Pharmacists and served on the board of directors. Jay is a lifetime member of the National Community Pharmacists Association, a member of the International Academy of Compounding Pharmacists, and a member of the South Carolina Pharmacists Association. Jay and his wife, Sherrie, are proud parents of 4 adult children and 2 precious granddaughters, Alexandria and Charley Rose. In his free time, Jay enjoys traveling, photography, and working in his yard. He attends Cedar Creek Church in Aiken.